So if you read my post on my Madrid Experience (find it here), you will know that my last night in Madrid was a late one. And that made my early morning flight to Barcelona a particularly terrible one. We made the mistake of going to sleep to sleep for about an hour only to wake up about 15 minutes before needing to head to the airport.

That morning is an absolute blur, everyone was still a little drunk and sleepy. Luckily Kevin forced everyone to be packed the night before so I was able to just slide my clothes on and try to be a real person. In the rush I left behind an earring that I have had since I was 3 years old and I am about to cry just thinking about it. Not sure why I thought it was a good idea to wear it on vacation anyway. RIP.

To make matters worse, while everyone was struggling Kevin was absolutely chipper. And I get it, we were going to Barcelona and yeah, normally that’s really exciting. But at 7 in the morning with one hour of sleep and an impending hangover….DO NOT SMILE AT ME. 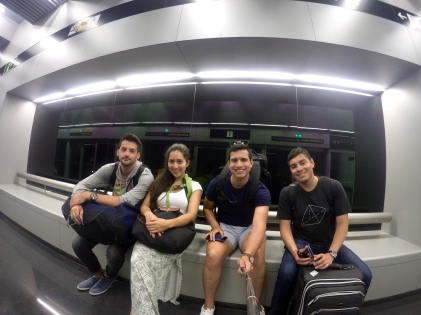 Arrived in Barcelona and still, only Kevin has a genuine smile.

Anyway, we got on our plane, and it turns out our flight was delayed…for two hours on the tarmac. I can’t tell you why, because I was knocked out from the second I sat in my seat. And Vueling had no apologies or explanations on the matter, but we ended up arriving two hours late.

We tried to take the metro to our airb&b because, normally, that’s the best method of transport. I guess we were just used to how the metros in Madrid were (exactly the same as in NYC), but the Barcelona metro system bested us. We had to make three transfers to reach our destination. And normally you pay for your ticket and make the connection you want. Except we ended up having to pay each time we wanted to switch lines. Not sure if we were just dummies, if someone could explain this that would be great. But, the experience was so long, sweaty, terrible, and expensive that it put us off public transportation for our entire stay. Splitting a cab was much easier and cheaper between 4.

On top of being late, everyone was so hungover and miserable that a nap was non-negotiable. Once we finally woke up we needed food, and nothing nearby was open because it was about 2:30 p.m. We ended up eating at this little restaurant with pictures of food on the menu, and we were the only ones in the establishment. Underwhelming, to say the least, for our first meal in Barcelona. 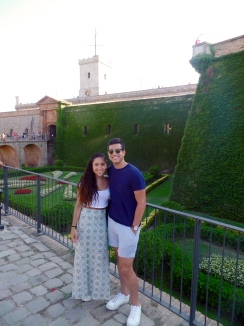 Luckily I had planned our travel days to be light in case delays occurred. And it actually ended up working out that we had gone so late. Since it was past 3 p.m. on a Sunday, the admission was free to Castell de Monjuïc. It ended up having a lot more to see than I expected. And our cab driver there was so friendly and gave us so many recommendations and interesting facts about everything we were passing.

After we were done we took a cab back to our airb&b and explored the neighborhood a little. We were staying in La Nova Esquerra de l’Eixample neighborhood, which is not very touristy at all. Very residential, tons of people walking their dogs sans leash. Which I realized is so common in Europe. Are european dogs better behaved or do Americans just not know how to train dogs? But, it was such a cute area and gives you a real insight on life in Spain. And we picked up much needed groceries like liters of water, and wine (detox just to retox?).

That night we were able to go see the magic fountains. I have never been to Las Vegas but I think they can hold their own to the Bellagio fountains. And the area they are in is so nice. There are so many people out enjoying the show, and tons of street performers. It’s a really fun atmosphere.

We ended up eating right near the fountains (after working up an appetite, climbing to the top) at a place called Tapa Tapa. This place also had pictures of food but was much, much better than our earlier meal, tons of yummy tapas and sangria. Patatas bravas became my new favorite thing.

The next day we had breakfast at a little cafe across the street from our airb&b, that literally didn’t have menus. Like, we made the mistake of asking, and getting a very strange look. So we asked for cafe con leche and a tostada and we got it, and it was delicious. I’m telling you, you can’t go wrong with tostada in Spain.

We then went to Sagrada Familia of course. Which, was indescribable, if this isn’t already on your bucket list it should be! After, we had another subpar meal within a block of Sagrada Familia, with literally THE SAME pictures as the first place! 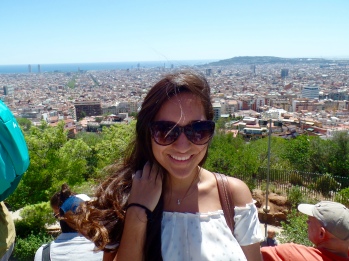 From there we tried to to go Parque Güell, and I say this with a heavy heart. This was one of the places I was most excited about going to and we arrived we found out that tickets were sold out until 8 p.m. They only let a certain amount of people into the monuments section (the good part) per hour so we didn’t get to go. We did however walk the trails and get peaks at the mosaics. It was still pretty cool and had some awesome views.

That night we met up with one of Tyler’s friends that lives in Barcelona. We finally had a truly delicious dinner at Tucco Real Food. And the carbs really paid off to keep me alive during our night out. We checked out Ice Barcelona which was really cool (literally and figuratively, lol). We met some fun people, took refuge on the patio overlooking the beach, and then decided to head to Opium. WAY too early at around midnight.

So we went back out to the beach and decided to kill some time by buying some beer from the (illegal) street vendors. We actually started talking to the guy and he told us all about his life and what his work is like, and why he had moved to Barcelona. It was pretty interesting. Around 2 a.m. we went back into Opium, and at this point it was ‘lit.’ Even though we missed seeing a well known dj by just a couple of days, the music was awesome and it was so fun. Eventually we left to spend some time on the beach. Tyler and our new friend stripped down and actually went into the water, but we didn’t make it to the sunrise.

When we woke up the next morning, there was sand EVERYWHERE. Tyler ended up bringing back half the beach in his wet jeans. Mildly annoying, totally hilarious. We headed to La Boqueria Market (worth the hype) and had a good breakfast. 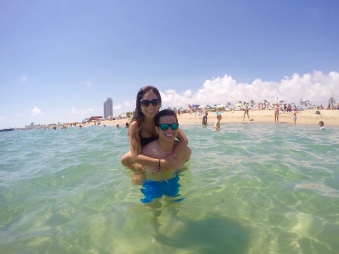 And then finally, the beach. Bogatell beach was so nice and I could have stayed forever! We saw a lady get whipped in the face with a small rubber ball used for a paddle game. It ruined her day. We saw her telling her boyfriend/husband/lover to go yell at the guys that had done it. And when he walked down to reprimand the two guys that were playing, he couldn’t contain his laughter. And obviously neither could we. Once we got enough sun in we headed back to get ready for the night (and snuck in some Mcdonalds, OOPS).

That night we had another delicious dinner at La Rita which was near Casa Batllo that we also checked out. Then we went to Dow Jones Bar which was another really fun experience. Tons of Americans and tourists as you would expect, but fun non the less.

So we skipped out on Parque Güell, Tibidabo and walking Las Ramblas, and didn’t have time for a few other Barcelona attractions. Naturally, I am already planning my return trip!

Find a video version of our trip here.

6 responses to “What Actually Happened in Barcelona” 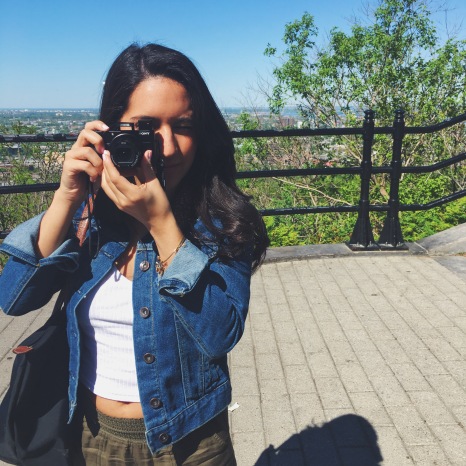 I’m Ana Sofia. I was born in Colombia, but I’ve resided in the U.S. for most of my life. I graduated from Penn State and right now I’m working in the ER and on a second degree. When I’m not working or studying I spend my time traveling, or planning to travel. 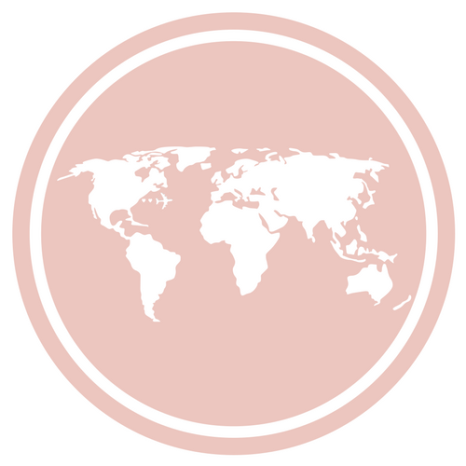