Colombia, although the country was once a dangerous place to live, let alone travel, it has come a long way and tourism is growing in popularity. I for one am quite glad because there are so many diverse, beautiful landscapes, mountains, valleys, ecosystems, churches, beaches, and most importantly, people to see and meet. You can find just about anything you’re looking for in Colombia.

Pasto, the capital of Nariño, is a small provincial provincial town that you’ll likely never hear about like you do Bogota or Cartagena. It is also where I was born. My hometown is an underrated city nicknamed “La Ciudad Sorpresa,” – the surprise city. The moniker came from the fact that when the city was first founded, there was nothing around it for miles. So, after a long day of travel through the mountains, the city seemed to pop out of nowhere as a surprise once you could see the valley. The city has grown immensely since then, so it no longer catches you by surprise.

However, I think this name is even more fitting now. I was lucky enough to drag Kevin with me in December to meet the rest of my family, and explore the city where I did a lot of my growing up. He’s also Colombian, but his family is from Medellin. They had many preconceived notions about my little area of the planet. Like I said, it is provincial and a little rural, so, many jokes and biases derive from that. But, what you’ll find, will surprise you!

Views from the airport 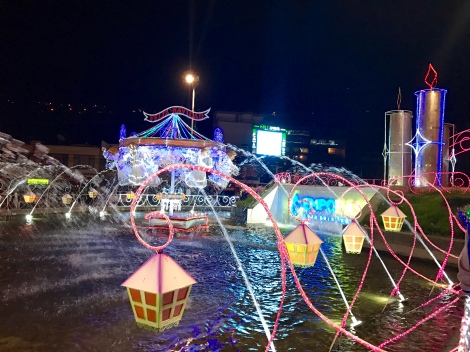 Christmas time in the city

Around town, the volcano El Galeras peaking through the clouds in the background

Mostly, I’m just blessed to have gotten to spend time with my family, some of which I hadn’t seen in 9 years. Especially during New Years, one of the wildest times to be anywhere in Colombia. It is heavily celebrated with fireworks, burning año viejos (dummies that represent the old year), and dancing all night long. Which, was unfortunate for Kevin, since he had a red eye flight on the 31st, so he was awake for a pretty long time. We got to spend the rest of our time enjoying el Carnaval de Negros y Blancos, which was declared a UNESCO Masterpiece of the Oral and Intangible Heritage of Humanity. For very good reason.

I’m Ana Sofia. I was born in Colombia, but I’ve resided in the U.S. for most of my life. I graduated from Penn State and right now I’m working in the ER and on a second degree. When I’m not working or studying I spend my time traveling, or planning to travel.